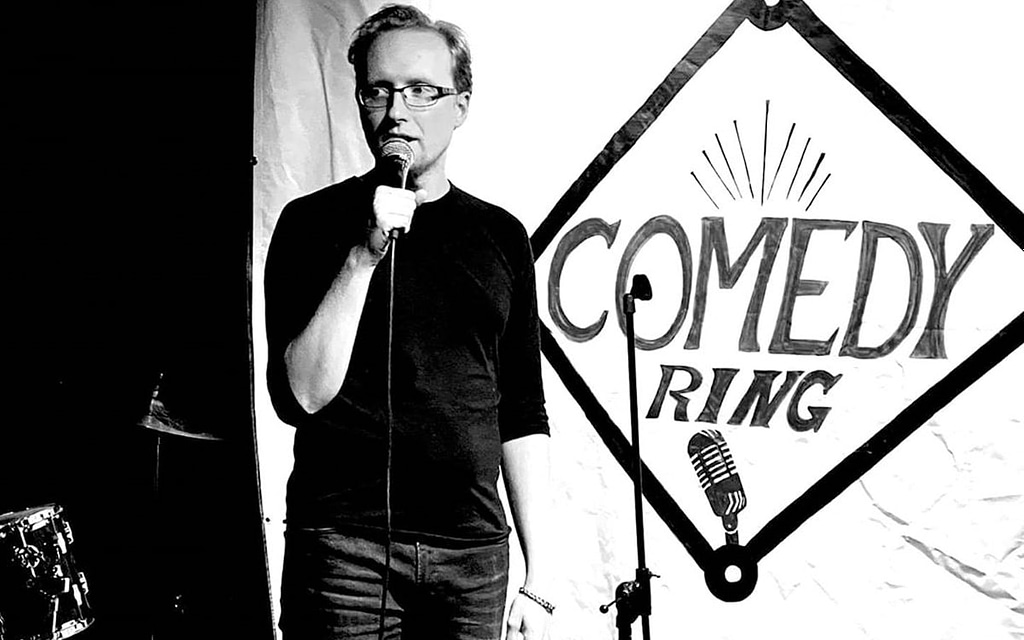 I am fascinated with the idea of bombing a performance.

I always want to know what someone’s worst performance was. Hearing about a great show is great, but for me, hearing about a bomb is even better. Which is what inspired me to start interviewing comics to share their bombing stories.

The first brave enough to sit down for an interview with me was Taylor Morrey.

Taylor has been doing stand-up comedy in Vancouver for the last five years, but has always loved stand-up comedy. His first inspiration was George Carlin. He can remember watching Carlin’s “You’re All Diseased” special and thinking, “I want to do THAT.”

Taylor describes his humour as being more personal than Carlin’s even though he tries to talk about a broad range of topics like Carlin did.

Taylor describes himself as having had “a mist of bombs,” but one bomb in particular stands out in his mind.

What happened that night was so bad that Taylor actually went home and wrote a post that he called “The Roadmap to Success in Stand-Up.” He read this post out to me and I knew that what I was about to hear was going to be good.

It was going to be a tough show and Taylor knew it from the beginning.

The host started things off by telling some of their usual jokes that would normally get the crowd laughing and ready for the next comic. Except the crowd was quiet. No one was laughing and as Taylor watched and witnessed the silence, he could only think “Oh fuck, this is going to be bad.”

That’s when Taylor started to get nervous.

He was also starting to get hungry. So hungry that he started to shake a little bit.

Unfortunately the food Taylor had ordered took longer than usual to get to him, and he didn’t get his food until he got called up for his set. At that point he only had enough time to quickly grab his food, take a bite and try to frantically chew and swallow while he was making his way on stage.

Taylor says that he doesn’t remember what jokes he told, but they bombed.

What he does remember, is becoming angry at the crowd because they were almost completely silent. But as the cliché goes, the show must go on, so Taylor kept going. He told a few more of his jokes that he knew were tried and true, but still got no laughs.

At that point he remembers asking the crowd “why do you people go out if you’re not fun?”

I now know that Taylor is a stronger person than I am because I would have run off the stage and cried in a bathroom after my first minute on stage. Instead, Taylor doubled down and decided to tell a joke about how having a dog is harder than having a kid because you know your dog is going to die.

The only response was a  lady in the audience yelling “OH THAT IS SO SAD!”

Taylor only replied “Oh sorry. Did no one tell you that this is an all dead dog show?”

At this point in the interview, my hand was over my mouth and I was cringing while trying not to laugh too hard at what Taylor was telling me. You’d think that this would be a good stopping point for anyone, but Taylor still had time left so he forged on.

And by “forged on” I mean that he dropped the f-bomb at least 50 times, and then got a few laughs with a joke about his girlfriend.

Again, you’d think that this would be a great stopping point. He got some laughs and could end on that semi-positive note, but no. That’s not what happened. Instead he told one more joke that got no laughs and ended his set how he started it.

And you know what?

That wasn’t even his worst set. At the end of his story, Taylor admitted that he’s had other shows that have gone worse, and gotten fewer laughs, but this was the one that stood out in his mind.

I don’t know about you, but I get it.