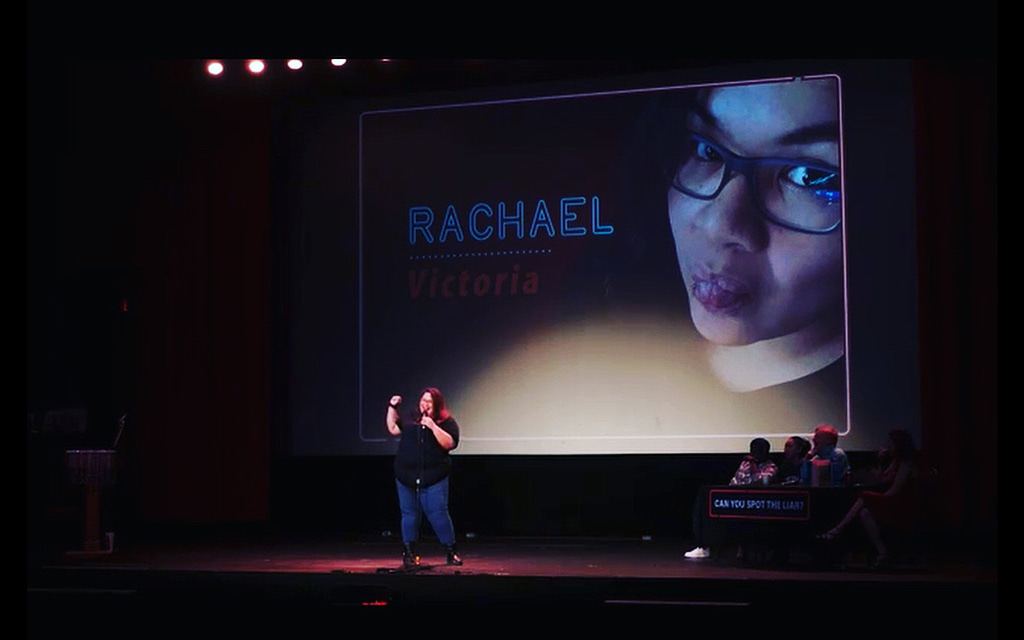 My First Time on a Vancouver Stage

I’ve been an audience member at New West and Vancouver comedy shows for the last two years. Sure, I only go to support my best friend, but something happened in those two years. Something weird, and wild, and very very magical. I can’t explain it. I just know that in the time that I’ve been watching live stand-up comedy in Vancouver and New Westminster, I’ve learned that love at first sight is real.

A comic walks onto the stage and immediately I perk up. I see them and my funny bone gets excited because I know – deep down in my soul, I know – that whatever is about to happen on stage is going to be amazing.

So far, I’ve never been wrong. Whenever I get that feeling, I always wind up laughing so hard that I nearly have an asthma attack and my cheeks start to cramp from laughing.

A feeling that I did not get walking up to the mic for my first ever performance.

I’ll set the scene for you! It was a snowy February night and I had driven 4 hours from my tiny town of Barriere, BC to Vancouver to perform in Story Story Lie at the Rio. I knew that I was perfect for the show because I’ve been a Tinderella since 2016.

At least I knew that I was perfect until it was time to walk out on stage.

You know that amazing feeling I mentioned before?

I didn’t feel it when I walked up to the mic. I couldn’t help but think of all the times that I’d made a joke and no one laughed. Nope, I didn’t have that love at first sight feeling as I walked across the stage at the Rio to take the mic.

Instead I felt gassy, and sweaty. I had suddenly forgotten the set that I had been practicing since I’d gotten booked for the show back in November. Seriously! I spent 3 months working on this 5 minute set and I forgot every single word of it as I walked up to the mic. All I could do was panic about what I was going to do with the mic.

Should I leave it in?

Should I pull it out?

I was introducing myself in Secwepemctsín and the set that I’d been working on for months came out of my mouth. It was like an out of body experience. My heart was racing. My lungs were squeezing tight. I couldn’t help but wonder if I was going to pass out before I got to tell my favourite joke.

I didn’t faint, bomb, or do anything else horrific. Instead I got up on stage and performed better than I expected. I even had fun doing it. Not only did I have fun performing, but people actually laughed at my jokes!

I’ll probably never know the answer to that question, but I can still dream that someone fell in love with me at first sight, right?

If you're not a comedy insider (or if you're only familiar with comedy as an industry at the highest level,) the title...