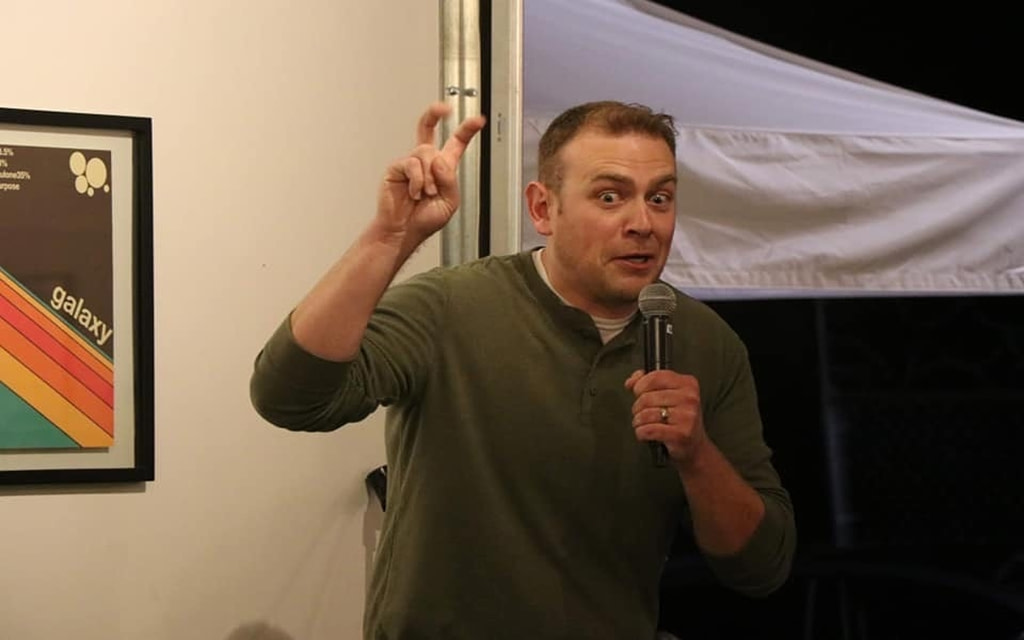 Dan Mills is a comedian that Lives in Bellingham, WA.

He’s a father of two and a husband of one. He performs in Abbotsford, Seattle, and everywhere in between, including a virtual show that he produces himself.

He went to his first comedy show when he was 11. That’s when he decided “I’m going to do that someday.”

It wasn’t until his 30’s that he felt like he had experienced enough life to talk about it and make it funny. His material centers around work, family, and childhood.

When he got into comedy, he decided that he would only perform clean material. His opinion is that he doesn’t curse in real life, so it would be fake to do it on stage.

Despite only performing clean, there was one performance that wasn’t clean enough.

Once everyone took their seats, the MC announced that none of the performers, except for Dan, have done comedy before. I think this is an interesting and sweet concept. I wasn’t performing though, so I don’t think that my opinion matters.

First an elderly couple did a sketch from a popular TV show in the 60’s. Cute, right?

As much as I want to write that all the performances were super cute, they weren’t. After that a few people told some one line jokes that Dan thinks they wrote on their napkins. Then someone told some racial jokes.

I didn’t think the night could get any worse after someone telling racial jokes.

But then the woman who was celebrating her anniversary stood up and did a slideshow of her celebrity crushes.

All I can picture is Ross Gellar’s list of women that he could cheat with. You know the list that he kept laminated in his wallet? Except this woman super sized that list and showed it to all of her loved ones.

It was awkward, to say the least, and no one was laughing.

Of course this was the perfect time for the MC to call the featured comic to the stage for his set.

Dan started off telling jokes that he says are clean. Or at least they’re clean if you happen to be a legal drinking age and are in a comedy club. They weren’t clean if you were one of the two families who walked in with their young children. Of course he was on stage talking about what he would be like as a meth dealer. He joked about how anti-drug programs made him wonder how someone would sell heroine in a middle school. Dan says he could see jaws dropping.

Not everyone was quiet. At this point Dan had a small group of people who loved him. They were all laughing and having a good time. Focussing on them, Dan did his best to power through the rest of his set.

He moved on to tell a joke about his daughter crying because someone called her a “c-word”. At this point he could feel the tension in the room. Normally, that would be a great thing for any performer, right? Having a whole room waiting with bated breath for you to finish your joke. Standing on stage with all eyes and ears on you. It’s perfect.

Even though everyone was waiting for the c-bomb to drop, Dan would never actually swear on stage. The kid had called his daughter a c-word, just not the c-word we’re all thinking of.

Which doesn’t matter. Dan was in the middle of his joke and it was the part where he’s contemplating uppercutting a 5-year-old. That’s when a mom in the crowd covered her kids ears. She glared up at Dan and said “ENOUGH!”

How do you save yourself after a moment like that? How does any comedian come back from that?

You don’t but Dan tried. He told the audience the cute and funny things that his daughter does and how she has a dark side.

He was able to salvage his performance and get a few forced slow claps at the end. Afterwards he even had a few people coming up to him to say “that was…something.”

Yep. That was something alright. I don’t think anyone can recover from being shut down by a mother no matter who you are.

Dan wasn’t able to leave right away. He was someone’s ride home and waited for them. Sadly there wasn’t anywhere for him to go hide. No green room. No janitors closet. He just had to sit there and wallow in his woes.

The upside of this whole debacle is that Dan learned a valuable lesson: If you’re performing at a private event, get the money up front.

What’s it like when a comic bombs on stage? Hear Taylor Moorey’s personal story of every comic’s nightmare… NOT getting laughed at!